Veranstaltungen Footage across the East-West Divide

Footage across the East-West Divide

Presentation by Nadège Ragaru at the H2020 “Visual History of the Holocaust”. Research Seminar 2021–2022

In the fourth session of CERCEC’s H2020 „Visual History of the Holocaust“ Research Seminar, Prof. Nadège Ragaru (Sciences Po, Paris) speaks about the life and afterlife of film footage documenting the deportation of Jews in 1943.

The March 1943 deportation of Jews from Bulgarian-held territories in Greece and Yugoslavia left only a few visual traces. Among them is a silent film footage, several minutes long, with partially edited rushes. This talk reconstructs the life and afterlife of this archival footage and its journey across the East-West divide during the Cold War. It follows the transformations of this visual document from an archival trophy into legal evidence and into visual traces of a foregone past. As the moving images travelled in time and space (Bulgaria, West Germany, Israel, etc.), they underwent multiple editing, and successively acquired documentary, judicial, and memorial values. In the last resort, this case study shows how a microscopic frame of analysis can contribute to both the Visual History of the Holocaust, and the transnational history of East-West competition/collaboration in war crime trials. 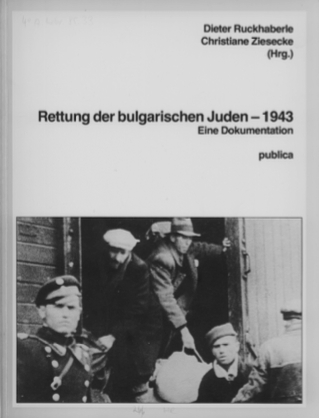 a.
a. Rettung der bulgarischen Juden